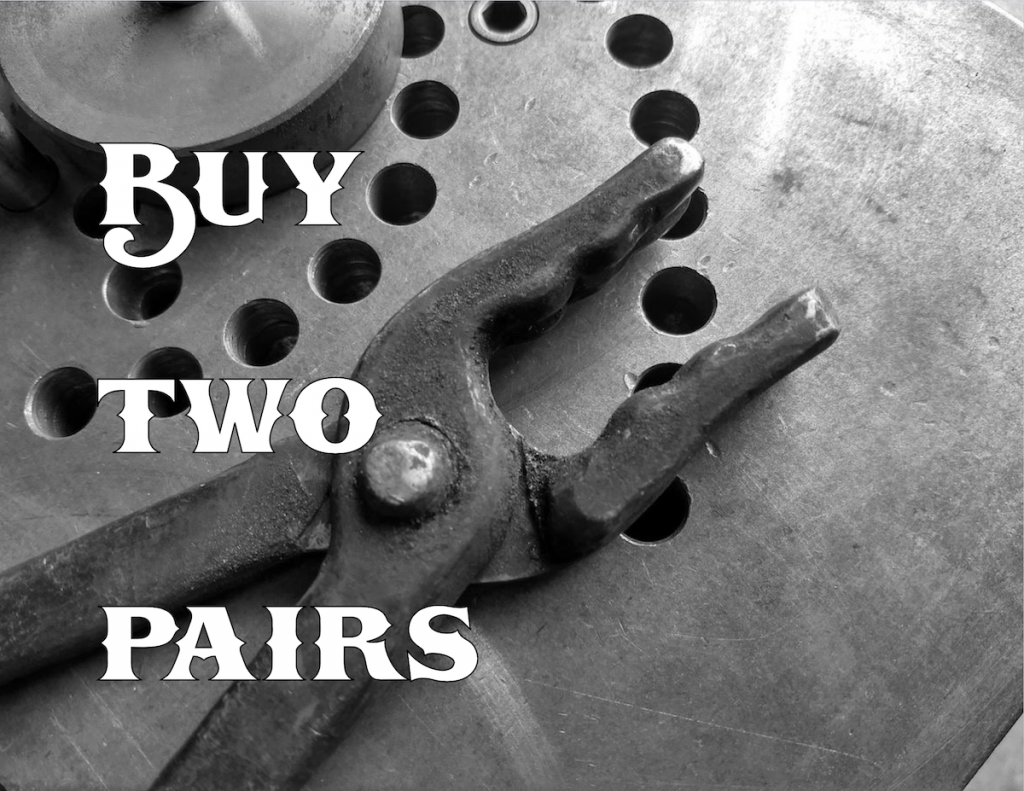 There’s an age-old debate in the blacksmithing world between the Purists and the Producers.

The Purists will tell you to make your first set of tongs.

The Producers will say that’s great practice, but what if you want to make something else? You’re stuck making tongs for 6 weeks trying to get it right.

I learned how to blacksmith with manufactured tongs. The first two pairs of tongs I owned were also manufactured. (I still own and use them to this day.)

My tongs were made by the now-defunct Capricorn International. They’re a style called Tom Tongs.

I purchased the two pairs from one of my blacksmithing instructors for $45.

Buying Tongs Will Free Up Time to Make Other Things

When I was learning how to forge I also took some time to make three pairs of tongs.

I wanted to figure it out.

[I still use one of those first pairs to hold on to pieces while I coat them in beeswax.]

BUT I was more interested in making other things:

All those things are easier to make with professional-grade tongs.

What Tongs Should You Buy?

If you want to work with flat bar, square stock, and round bar, but have a small budget, buy Bolt Tongs from Centaur Forge.

Here’s what you should consider:

The V-shaped jaws hold onto square, flat, and round bar. Good all-around tongs.

Why Two Pairs of Tongs?

I would buy two very different pairs so you have a range of things you can do.

A pair for small stuff and a pair for big stuff, for example.

I bought two that were very similar when I started out. The only difference was 1/4-inch in the jaw width.

And, no surprise here, I mainly used one pair. The other one just kinda hung out until I had to do something goopy.

That second pair ended up being my waxy pair for finishing.

So buy a couple pairs if it’s in the budget, but make them different.

Did You Miss the Anvil and Forge Posts?

You can get my recommendations on Anvils here:

And my recommendations for Forges here:

These posts are part of a series on Setting Up Your Home Blacksmith Shop.

Next we’ll be talking about “The Best Blacksmith Hammer.”